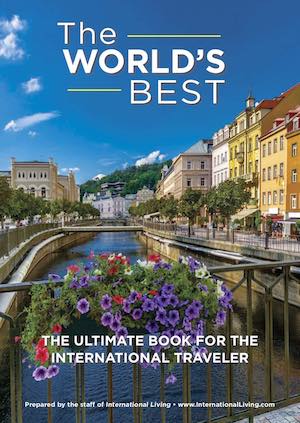 The World's Best: The Ultimate Book For The International Traveler

We asked our International Living network of over 200 seasoned travelers and expatriates to spill all their best-kept secrets… and they obliged:

The result is a rare glimpse into 4,481 of the
world's most fascinating places to go and things
to do ever assembled…

Every traveler has precious moments they can recount after a fabulous trip.

The romantic café you accidentally stumble upon down a cobblestone alley in Paris, where time stands still for an entire afternoon. The locals-only market in Shanghai where you discover bargains beyond what you imagined possible for a tourist. The 1,000-year-old cathedral you traipse through in Rome—when you close your eyes, you can still see the light streaming through the stained glass just so at sunset.

At International Living, we're lucky to have people who share these private moments with us all the time… too lucky, in fact, to keep them selfishly to ourselves.

So we compiled literally thousands of our favorites for you to explore and enjoy, and we've humbly called it The World's Best: The Ultimate Book for the International Traveler.

This is, by far, our most ambitious publication. I think the result will surprise you. Or amuse you. Maybe even excite and inspire you.

I can tell you this, you'll be a little breathless when you open the first page and look at the table of contents. Here's why…

A Little of Everything… From Everywhere

The World's Best is exactly that—a subjective set of bests culled from more than 200 seasoned travelers and expatriates around the world who are affiliated with International Living. It spans 76 countries across six continents… and is contained within 800 pages… barely!

It is more of a traveler's log, with notes to a dear friend in the margins. From the sites you shouldn't miss to the restaurants you might unless you know where to look for them.

We didn't give our contributors a template, or a word count, like most publishers do. We didn't just have them collect a bunch of brochures, or call the Ministry of Tourism for a general overview. Believe it or not, we weren't looking for quantity of information (though we got that, too!), but quality. The quirks as well as the straightforward facts:

The World's Best covers so much ground you'll have jetlag by page 400 (by then we are in India)… and you're still only half-way through (there's still North and South America, Japan and South-East Asia to go!).

Even if you're a seasoned traveler, you're sure to discover more than a few places that weren't on your must-see list. Until now.

(Personally, I was ready to book a trip around page 166 when I read about Bulgaria's spa resorts. The country has more than 220 mineral water springs which, along with the mud along the Black Sea coast, are believed to have curative properties. One of the best spa resorts in the world is here with its abundance of sunshine and rich vegetation which make for a very relaxing stay. For some, this is armchair travel at its best. No need to board a plane… unless you desperately want to… instead, you can enjoy The World's Best from a cozy spot in your living room.

For others, the urge to run to your computer and book a flight will be almost impossible to resist. So why fight it?

It's almost impossible to sum up the magnitude of The World's Best… and that's just the point. Of course, there are hundreds of places that you might already know, such as:

Embrace a vast and diverse world

Then, there are the "signature" aspects of each country… the places you must see, and the things you must do. It's more than you can squeeze into one lifetime—but it's certainly worth a try:

Use Our Best to Discover Your Best

Our best may not be your best. To some, the best means the most expensive, luxurious digs in town. Like the Claridge's Hotel in London—where a Hungarian Quartet plays in the lobby (and have been for nearly a century), liveried attendants greet you at your door and dress-maids are available to help you choose what you'd like to wear for the evening.

To others, it's knowing the best place to go to get the inside scoop on the town and its major characters. Like Eva's in Belize, where you get the cheapest food… and all the local gossip.

Woven throughout the newest edition of The World's Best, you'll find the fodder for creating your own personal best list. Start with ours, and explore from there. After all, most great adventures start with a tour guide of some sort. Maybe it's a book. Or the local guy you meet when you sidle up to the bar and have a drink before you get settled in your hotel.

There's a strange balance—one that every experienced traveler understands—between embracing such a vast and diverse world, and breaking it down into cherished moments when it feels small… and uniquely your own.

Our first edition of The World's Best dates back to 1986—and was just 207 pages. The world has changed so much since then. The Berlin Wall came down, Eastern Europe opened its doors to foreign travelers, China joined the World Trade Organization, sleepy Caribbean islands woke up, and Central America started coming back to life one small, impoverished country at a time.

The world seems to have gotten much bigger in the intervening years. Yet, at the same time, it seems smaller and more accessible than ever.

I certainly wouldn't presume to call The World's Best complete. Even 200 people don't have a handle on such a vast and glorious place.

But I can tell you that you will discover nooks and crannies that you never knew existed, experiences you'll want to have for yourself, and a wish-list longer than a child's at Christmas of places to go and things to do.

Take a look at this list… it is merely a smattering of this impressive, and slightly quirky, compilation of The World's Best:

I could go on and on, and still only mention a fraction of what is contained in The World's Best. It is truly a treat for the senses, and the imagination, that is not to be missed.

The Best Deal On The World's Best

I have to admit that I'm spoiled. When I'm going somewhere—almost anywhere in the world—I have a rolodex that points me to the nearest International Living country expert. I am accustomed to getting the inside scoop on just about any place I want to go. From the biggest and best attractions, to the little hole-in-the-wall dives that serve the best food and spark the most animated conversations.

You should enjoy that same privilege—the chance to go anywhere in the world you can imagine, and glimpse a little slice of life in that area before you jump on the plane. If you also love to travel, I probably don't need to tell you how valuable that kind of access is to globe-trotters like us.

Consider this: When you go to a nice hotel and ask the concierge where to go for a romantic dinner… perhaps one where you will propose to your beloved, you would think nothing of slipping him a $5 tip for his trouble, maybe more. Right?

Choose from romantic getaways and hideaways around the globe

When you have The World's Best, you can choose from romantic restaurants and hideaways around the globe and test out the right atmosphere to pop the big question before settling on one.

When you go to a new city, and you engage a taxi to take you along a scenic drive—you'll tip him handsomely for his thoughtful service. And you hope his idea of scenic matches up with yours.

The World's Best provides you with an entire chapter of details on scenic drives… from Highway 1 on the West Coast of the U.S., past barking sea lions and secret beach access along the way… to the fairytale trail in Germany, past the homes of Rapunzel, Little Red Riding Hood and the rest of the Grimm Brothers gang… to the best route from Nairobi all the way to Nakuru, past the sites where the earliest traces of man were discovered.

Each of these little treasures alone is invaluable. If you order The World's Best today—while it's hot off the presses—you'll pay a fraction of a cent for each of the thousands of bests we've assembled. For just $39.95—less than you'd pay for dinner and a movie in any major U.S. city--you can indulge in hours of global daydreaming and hopeful trip planning.

And, of course, if you're at all disappointed—which I can't imagine—feel free to send it back for a full refund within 30 days.

How To Hold The World In Your Hands

As you log thousands of miles and cross over rivers, valleys and oceans, the only thing you'll miss are the frequent flyer miles you'd accumulate if you had to pack your bags and hop on a plane, rather than merely turn the page to get from one place to the next.

It will likely be another 20 years before we undertake such a project again… most of us here at International Living are going to be too busy checking out each other's "best" recommendations. So I hope you won't delay and will reserve your copy now.

Just click here to go back to the top of the page and click "Add To Cart".

Hope to see you at the Aurora Borealis… sometime this decade.

P.S. Engaged? Browse The World's Best for a honeymoon destination. Love to shop? Explore the entire section devoted to the world's best shopping. Crave sports? Discover sporting destinations that may not make it onto ESPN… you might have to check them out for yourself. Take a moment now and get your copy while they last. I dare you to tell me you can't find anything here that piques your curiosity and gets your heart racing with excitement. Care to take the challenge?

Please Note: We estimate you'll receive your copy of The World's Best: The Ultimate Book For The International Traveler in 5-10 working days within the U.S. Please allow some additional time for international delivery.